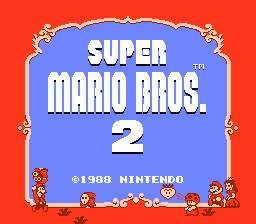 Every great series hits a few speed bumps on its way to greatness. Sometimes, the developers reach a limit to their creativity and sometimes, they go just a little too far with their ideas. Historically, these deviations don’t tend to be picked up so well by the fans of the series. While a given series may not fail because of it, the dark spot will always remain on the fans’ minds.

Enter Super Mario Bros. 2, one of the many sequels of the NES generation that didn’t quite live up to the standard of the fanbase the

original had carved out. At the time of its release, everybody loved it, players and critics alike, but now, people tend to generally disregard it as a ‘fake’ Mario game. They wouldn’t be wrong, considering that the original game was called ‘Doki Doki Panic’ and was not a Mario game. Naming this as a bad game, however, I think is inaccurate.

The story of the game begins when Mario and his friends wind up in a cave and end up in a strange world. This place, of course, is being terrorized by a creature named Wart, and his minions are running rampant through the lands of this world. Being the good Samaritans that they are, Mario and his merry band trek to defeat Wart and his subordinates.
Now along with Mario, who acts as the ‘well-rounded’ character in this chapter, you can choose from three others to adventure with: Luigi, Mario’s high-jumping brother, Toad, the retainer to the kingdom and fastest of the group, and Princess Toadstool, who can float for a period in her jump to clear wide gaps. You’ll notice that these characters, and many other enemies and items you see throughout this game, are the part of the basis for the current incarnations of Mario games.

As you travel through the lands, mere head stomping will not take care of the gallery of new enemies. You can pick up vegetables to take them out with, or pick one of the enemies up themselves and chuck them at one another. There are still warp zones, as well as potions (which send you into Subspace, if that sounds familiar to you), POW Blocks (which clear the screen of enemies), and stopwatches (which stop the enemies for a bit). To counteract this, though, you will not see Koopa Troopas and Goombas in this world. Instead, you’ll run into Shy Guys, bullet spitt

ing Snifits, and high jumping Ninji, among other enemies you may recognize. Again, if it seems like it’s an entirely different game, it was supposed to be.

On an editorial note, this is my favorite of the original series of Mario games. I appreciate that in this offering, there wasn’t simply running, jumping, and plummeting through eight worlds again. It felt like there was more to do, and while it’s kind of bizarre to hit a dinosaur in the face with an egg, it’s no stranger than jumping on a turtle’s head to stop it from moving at me.

Ask nearly anyone with vivid memories of this game, and you’ll find that nearly all of them only used Princess Toadstool, since everyone else in the gang paled in comparison. Luigi’s controls feel slippery with his jump, Toad’s quickness is only of use in Subspace, and Mario feels mediocre. The game can be won with any character you choose, but choosing any other character feels like challenging one’s self for the sake of a challenge.

The graphics are a huge step up from the original, though not anything spectacular so far as the system goes. The landscapes and sprites 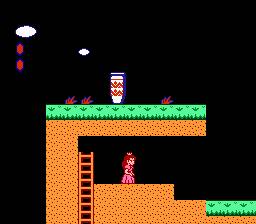 are colorful and fun, and the designs are original. Having different terrains for each world and depicting them so vividly is a task in and of itself, and the designers did it well. The music is enjoyable, too. It’s quirky and upbeat, much like the tone that the Mario franchise was taking for the next stretch of the series. It could be said the entire tone of the Mario universe today can be accredited to this game with a bit of credit due to Super Mario Bros. 3.

There are a few flaws, as well, to this game. First of all, it may have been too much of a deviation from the original which wasn’t much of a problem for people at the time, but now, it’s an off-putting issue. The game is also not terribly difficult, but when it is too difficult, there are only two continues before you’re booted back to the beginning of the game. Some could claim that the game’s ending is an issue. Without ruining it, it’s an ending that plenty of NES games have had variations on, but if the trope that it follows bothers you, you’ll be disappointed. After stripping the game down, it’s hard to find many flaws outside of the usual of ‘it’s not like Mario Bros. because…’, and that’s a good thing.

To people who don’t enjoy this game, it’s hard to argue with their logic. It’s definitely a step in a different direction, and companies can lose people when they change anything about a franchise, but they can also gain so much more from it. So many of the characters and ideas that we’ve come to love with the Mario games are derived from this game. This game, at its core, does stand up to the test of time. Most people, however, may not agree. Given the chance, the game proves itself a notable addition to the now endless series. As the fifth highest selling game of the Nintendo library, I’d say it deserves at least that distinction.