Trilogies are not unheard of in the video game world nowadays. Good things come in threes, so it’s said, and the Castlevania series did their best to prove that adage right back when they were hot and heavy in the Nintendo days. Castlevania III: Dracula’s Curse came along after the original creeped audiences out, and the second one probably confused the fans just as much so.  Figuring out how the third one would fare was probably an adventure when it came out, but how does it stand up to the rest of the series? Even more important, how does it stand up as a game in general with over twenty years under its belt?

This installment of the Gothic terror ride takes place as a prequel to the first two. The Belmonts, a family exiled from Wallachia for being considered ‘super-human monsters’ are asked back to take care of Dracula, who has been ravaging the countryside. Enter Trevor Belmont, ancestor of Simon (from the originals, for those keeping track), who makes his trek through various locales to put an end to the destruction that is being wrought. Along the way, though, some of those that he saves will join him. Along for the ride are Grant Danasty, a pirate who was turned into a specter, Sypha (Syfa, as this game spells it) Belnades, a mysterious figure who- SPOILER- turns out to be a woman and a hunted witch who is captured in stone by a Cyclops, and Alucard Tepes, the half-blood 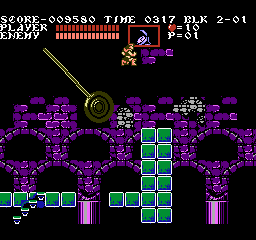 son of Dracula who hides away when his mother is killed by townspeople but comes out to defeat his father who he blames. Yes, this is the first of many appearances for Alucard, a historical member of Castlevania history. These four stand as the force against the evil of Dracula and his famed castle.

The first thing to bear in mind is that these characters are not just shells to make the player feel as though they are playing as different characters. They all play differently. Grant, for instance, can climb walls and ceilings, making inaccessible places in levels that much less so. Sypha is weak and has limited jumping ability, but her subweapons are magic rather than actual weapons, and they can serve as some of the most powerful attacks in the game. Alucard can shoot fireballs and turn into a bat for a limited amount of time. Trevor plays just as you would expect- like Simon. For the rest of the mechanics, they tend to play the same way. Upgrade your whip, use abilities to get through a level, fight a boss, and repeat until you reach Dracula. The ability to bring a partner with you, as you can only have one of the three partners with Trevor at any given time, really ups the replay value on this one. It saves the game from being a clone of the past two in the series.

Traveling from level to level is a combination of the first two games. Once you beat a boss, you are brought to a map screen where you can choose your path. I think that there’s some kind of difficulty difference, and there’s the possibility that you’ll miss a partner or two if you don’t go down the right paths (I missed Alucard in my first playthrough, for instance), but it does feel like the player gets a bit of a choice in their torture. It defeats the linear feel of the first game and rectifies the confusing set-up of the second.

The game itself is a fun time. I’ll say it right now: it’s probably my favorite in the Nintendo entries. The game itself feels like a fleshing out of the Castlevania universe, showing more characters and offering a bit more immersion for the pla

yer.Also, there was a near guarantee that you did not play through the same way that your friend did, and if you did, one of you probably chose a different partner. I guess all of this is leading up to the fact that Dracula’s Curse acts as the main course of a nice dinner out, and it leaves a satisfying taste in a gamer’s mouth.

My main complaint, as it often tends to be, is the uneven difficulty. I appreciate a hard game. I’m not against a challenge, but found myself having trouble with random levels throughout the game. One level would kick me around for a bit, but the next would be a breeze. It was almost anticlimactic at points, feeling awesome about beating up some awful monster and finding a new travel buddy, then I could just stroll through a nice little stretch before getting abruptly slammed by another level. By now, I guess I could expect it, but it adds a metaphysical frustration to the mix that only Nintendo seems to produce.

Musically, the game is just as sound as the last two entries and even as I played through now, it entertained me. I could not pick out just one track, as usually happens, but it was all an aural blessing to the game. Sound effects, for the most part, sound like recycles from past games. This seems to come down to an ‘if it’s not broken, don’t fix it’ type of deal, though, and in the end, tends to be inconsequential, though it adds to the atmosphere.

Graphically, the game finds itself on the fence. When the game has its presentation on, it’s fantastic. Levels like the ghost ship and, of course, Dracula’s castle find themselves being great odes to what made the 8-bit era great. Some areas, though, found themselves almost trying to force variety, bringing clashing and offensive colors together. It’s more rare here than, say, the original entry, but it still exists, which is kind of upsetting since the second game was actually graphically nice throughout most of it. The characters are 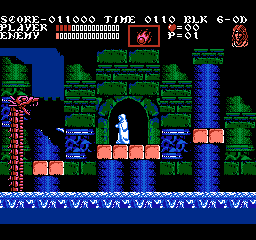 where the game seems to shine, though. Sypha and Grant are great representations of 8-bit characters, and Trevor feels like an advanced Simon. Alucard is a little weaker, but he’s also impressive compared to various other games of the time. In the end, the game has its head on straight with its visuals, but it takes a few missteps along the way.

Of all of the original games in the series, this one stands up to the test of time the best. The platforming elements feel polished, the gameplay is interesting and immersive, and it makes for a great end (beginning?) to the trilogy. As a platform game in general, it stands up on its own well, also. Anyone who is looking into the roots of the series, I would recommend this entry above all others. It’s nearly flawless, so far as the standard for the time is concerned, and it’s an awesome foray into retro gaming so far as the current time is concerned. While I think the entire trilogy is great and classic, I can’t promote enough that people should try this one out.

As a note, I managed my way through with Sypha (I love magic users in games), as a part of a challenge/expression from a friend, so I’m interested in finding out who other players end up buddy-ing up with. Feel free to let me know!